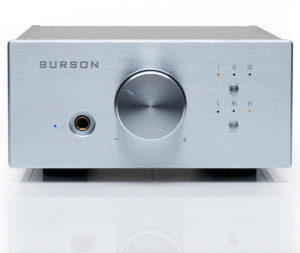 “I also heard the terrific Audeze LCD-2 headphones for the first time, and quickly requested a pair for review. I also mentioned that I would also need a headphone amp. Bender then offered me the loan of the Burson Soloist headphone amp/preamp that is the subject of this review.” 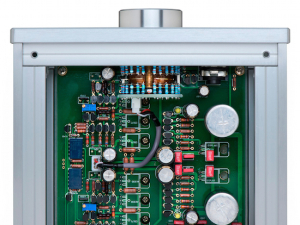 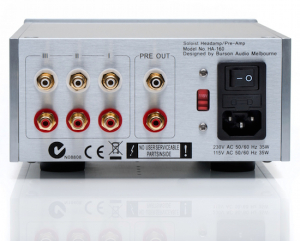 “From the outset, I was impressed with the heft of the unit, especially given its small size (7×10×3 inches). Weighing in at just over eleven pounds, it is obvious that this is a serious piece of gear.”

“The volume control has a weighty knob with a solid feel. The control may first appear to be of the coarsely-graduated, detented variety, but this is due to its 24 stepped array made by Burson Audio especially for this application. The result is a total elimination of any distortion introduced by the volume control. “

“the Soloist has a very high overall build quality.”

“The Soloist had more than enough gain to drive the Audeze LCD-2s … The Soloist could not only play loud, but it was very clean at all levels, with no indication of distress. It always performed flawlessly during my review process.”

“Given the performance of the Soloist as a headphone amp, I was anxious to give it a turn as a preamp in my main system. I wasn’t disappointed—rather, I was pleasantly surprised.”

“I attribute that slight warmth or sweetness to its class-A origins.”

“The treble performance was closer to what I typically hear from far more expensive gear.”

“Large scale choral works were handled with aplomb… I could hear the fullness and detail that gave me a clear sense of the size of the Dallas Symphony Center. The massed voices had strong presence. During loud passages, the voices swelled and receded, but never became harsh or hard, “

“I found that the Soloist got out of the way and let the music happen.”

“The Soloist is also quite capable at presenting a believable sound stage. The stage was quite wide and deep as dictated by the recording. “

“Bass performance seems to be a Burson specialty. I was impressed with the (Burson Timekeeper) power amps’ performance in this area, and the Soloist followed suit. “

“The Burson Soloist is a stellar performer. It wasn’t overly warm or romantic but as I said, it has that Class A touch of sweetness that I liked. “

[It is with great pleasure that we award the Audiophilia Star Component Awardto the Burson Audio Soloist Class A Headphone Amplifier/Pre Amplifier. Congratulations! – Ed]