“The Burson Supreme Sound op amps deliver a wonderfully deep and rich sound. The harmonic texture seems more complete and realistic compared the the Sparkos devices. The Bursons are also much more detailed and revealing. Sometimes this can make the music sound worse as you hear the faults in the recordings.”

“Detail retrieval is the outstanding feature of the Burson devices and this contributes to the sound stage and tonal richness.”

“The resulting improvement can be spectacular, but do not expect everything to sound better. Some albums reveal their deficiencies even more, the usual culprits for me are most of the recordings from Queen or Led Zeppelin.

The music that really shines is most of the Diana Krall catalogue or The Tallis Scholars and the Allegri Miserere. You hear so much more detail, the micro dynamics are revealed in all their glory.” 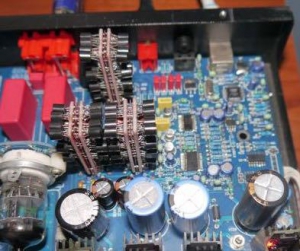