“The Burson Audio Virtuoso’s musical performance is the eye-opener… Burson Audio would rather let the sound of the music do the talking rather than peppering their products with tons of functional gadgetry you’ll never use. Their headphone amplifiers, and in this case DAC with preamplifier, deliver what I and my friends would call the “straight dope”.”

“I loved (the previous Conductor) sound so much it became a permanent fixture within my Sonic Satori Personal Audio Lab. The thing I wasn’t ga-ga over (the old Conductor) was the on-board DAC. Seems I could squeeze far more musicality out of the Burson Audio Conductor’s headphone amplifier when using my reference DACs ahead of it in the signal path. Burson remedied that situation with the Conductor Virtuoso. The amplifier and DAC are a wicked combination…. Right away I thought to myself “this is what the Conductor strived to be.”

“While I enjoyed the original Conductor very much, the Virtuoso is on a whole other level when it comes to resolution. The way in which it handled micro and macro-dynamic detail retrieval sounded effortless. It also bests the original in its dimensional presentation. The Virtuoso is a special breed of solid-state electronics.”

“The speed and precision of solid-state plus the warm, textural feel of tubes. With products like the Virtuoso, I don’t feel the need to warm things up. The sound is controlled, but not so linear that it bores me. There’s excitability to the music, a lively-ness that’s engaging and fun – but also realistic. It’s not too loose, and it’s not overly tightened either. It’s right down the middle, in that sonic sweet-spot where the music is not so affected that I end up thinking about the gear all the time. So my listening sessions with the Conductor Virtuoso were always a treat, never a choir. ”

“the Sennheiser HD800s, especially when fed serious power, have this wonderfully lush sound, and a huge sound-field. They sound full-bodied despite the vastness and true-to-life dimensionality.”

“The Conductor Virtuoso + Sennheiser HD800s are a spectacular headphone system. The amp and DAC surpassed my expectations during this listening session.”

“along with my Audeze LCD-XCs (both wired with Double Helix Cables Comp4) showed me why the Burson Audio Conductor Virtuoso deserves to be recognized as one of the leading solid-state headphone amplifiers around.”

:I feel confident giving it an enthusiastic thumbs up all-around. I’m going to replace the Conductor with the Virtuoso ASAP in the Sonic Satori Personal Audio Lab.”

“If you’re a fan of solid-state sound and modern aesthetics, and the Burson Conductor Virtuoso is in your budget, then do what you have to in order to give it a listen ASAP.” 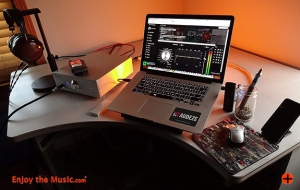